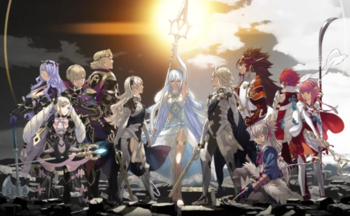 The path is yours. From left to right:  Camilla, Elise, Leo, Xander, the female Avatar, Azura, the male Avatar, Ryoma, Takumi, Hinoka, and Sakura.
You are the ocean's gray waves, destined to seek
Life beyond the shore, just out of reach
Yet the waters ever change
Flowing like time
The path is yours to climb
— Lyrics to "Lost in Thoughts All Alone"
Advertisement:

Fire Emblem Fates (Fire Emblem if in Japan) is the fourteenth installment in Nintendo's Fire Emblem series of Strategy RPG games, developed by Intelligent Systems. It was created by the same team that worked on the previous game, Fire Emblem Awakening.

The game was revealed in a Nintendo Direct on January 14th, 2015, exclusively for the Nintendo 3DS, featuring the same graphical and art style as Awakening. The story was penned by notable manga author Shin Kibayashi, writer of series such as Get Backers, The Drops of God and Psycho Busters. Said story revolves around the choices made by the player, split between two kingdoms — the "peace-loving" Hoshido, and the "glory-seeking" Nohr.

Like other Fire Emblem installments, Fates begins with the creation of a custom Avatar, who has the default name of Kamui in Japan and Corrin in the West. Unlike previous entries, the Avatar takes the role of the main protagonist of the story rather than a faceless tactician or a deuteragonist. Born among Hoshido nobility, the protagonist was raised by the Nohr royal family and, on the brink of war between the two kingdoms, must choose between allying with their Hoshido or Nohr families.

The game is split into two main versions, Birthright and Conquest, each with their own campaign. Birthright has the Avatar side with Hoshido, which is more straightforward. It has a simpler story more reminiscent of older Fire Emblem games, and plays more like Awakening, with the return of a world map and allowing the player to grind. Conquest has the Avatar side with Nohr, and revolves around trying to reform the more morally-questionable kingdom from within. It is more challenging, with gameplay more like older Fire Emblem installments (such as limited resources), and has a more complex plot. There is also a third campaign, Revelation, which can be purchased as Downloadable Content or packaged with the Special Edition. Its gameplay is a balance between the ease of Birthright and the difficulty of Conquest, while the story resolves several unanswered plot threads found in the other two versions.

The general mechanics of Fates are similar to Fire Emblem Awakening, though there are some balance changes: the secondary unit of a Pair Up is no longer able to attack or defend at the same time, but whether they are able to do either is no longer determined by randomness; reclassing has been altered to be more straightforward, but at the same time it is also more limited; the influence that the Weapon Triangle has on combat has been increased, and it now includes magic and bows as a part of the system; Breakable Weapons have largely been done away with, but stronger weapons now incur debuffs to the user.

Ryoma: We swear to our people...to our countries...and to the brave soul who brought us together...
Xander: Hoshido and Nohr are united together forever.
Both: We swear to you!

Example of:
Water Is Womanly