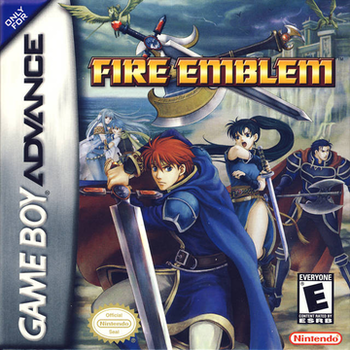 Once, dragons and men coexisted. They shared a peace forged in wisdom, a peace that lasted many generations. All that was lost when mankind disrupted this balance in a sudden onslaught.
Man fought dragon in a savage war that shook the foundations of their world. This war was called The Scouring.
Defeated and humbled, dragons vanished from the realm. In time, man rebuilt and spread his dominion across the land and on to the islands beyond.
A thousand years have passed since those dark days ended.
— Opening
Advertisement:

The Blazing Blade is a prequel to Fire Emblem: The Binding Blade, taking place about 20 years prior. The game stars Eliwood, Roy's father, as he investigates the disappearance of his own father with his friends Hector and Lyn, leading them to clash with a brotherhood of assassins called the Black Fang.

In terms of gameplay, The Blazing Blade is a Mission-Pack Sequel to The Binding Blade, using the same core mechanics with some minor additions like weather effects and special victory conditions. (Not every chapter has a victory condition of "Seize the enemy's throne", as those in Binding Blade had.) The biggest change comes from the inclusion of two story paths: Eliwood's Tale and Hector's Tale. The original story is Eliwood's Tale, played normally on the first go-around with Eliwood as the protagonist after completing Lyn's Tale (a 10 chapter tutorial/prologue designed specifically for the international audience). Hector's Tale is unlocked after the game is beaten once and can be selected on repeat playthroughs instead of Eliwood's Tale after Lyn's Tale is completed. (In fact, after completing the game once, it's possible to skip Lyn's tale altogether.) Hector's Tale makes Hector the main Lord and protagonist instead of Eliwood (changing the narrative slightly to accommodate for this), increases the difficulty, includes some extra chapters and characters, and provides new story information not given in Eliwood's Tale. Multiple story paths would later be used in Fire Emblem: The Sacred Stones, Fire Emblem Fates, and Fire Emblem: Three Houses, though the three games handle the execution differently.

Another addition is the Tactician, a somewhat customizable character. They don't participate in combat, but they are the one In-Universe that directs the army and act as the player's surrogate. The Tactician is a precursor to the much more intricate Avatar unit used in later games Fire Emblem: New Mystery of the Emblem, Fire Emblem Awakening, Fire Emblem Fates, and Fire Emblem: Three Houses.

The Blazing Blade is followed by Fire Emblem: The Sacred Stones, which takes place on the continent of Magvel in a new continuity.