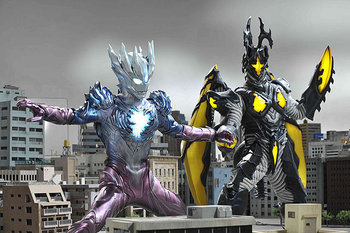 An Eleventh Hour Ranger is any person who joins an ensemble right before or during the endgame/Grand Finale, sometimes even right before the Final Boss fight. There could be many reasons for this:

Compare Sixth Ranger for someone who doesn't join the team at its formation but rather mid-adventure.

In Videogames, these suffer from Late Character Syndrome. Compare Last Episode, New Character, Gondor Calls for Aid, Back for the Finale, Changed My Mind, Kid, and 11th-Hour Superpower.

This is an Ending Trope. Spoilers.