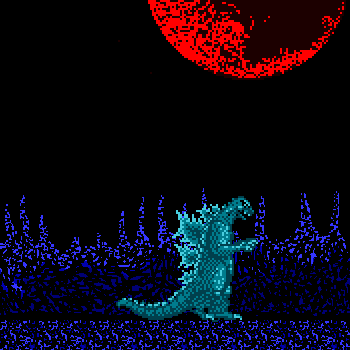 ) is the work of sprite artist Cosbydaf. It relies on a combination of first person narrative and edited video game screencaps to tell its story.
Advertisement:

One day, Zachary, our protagonist, is given a bunch of NES games by an old friend of his. Being an enormous Godzilla fan, he starts with a nostalgic favorite, Godzilla: Monster of Monsters!. Shortly after beginning, he finds that the game is glitched, presumably from a hack. At first he's delighted to find that the game includes monsters that weren't in the original. He becomes suspicious when he faces extremely recent Godzilla enemies from films that came out long after the game's release.

Things take on a decidedly darker turn as a shapeshifting beast known only as "Red" appears, displaying awareness of Zach's existence; from there, environments become ever more sinister, cheesy monsters transform into indescribable abominations, and twisted worlds spawn, seemingly independent of Zach or even the game itself. The game reveals knowledge about Zach that it couldn't possibly have as the mind games of the insidious entity leading it all grow more and more aggressive...

A sequel to the original story, named Godzilla: Replay, is currently being created. It involves the game cartridge falling into the hands of another gamer named Carl, who plays through an entirely different adventure alongside Godzilla (of course), Rodan, and King Ceasar, facing a group of giant monsters based off of the Seven Deadly Sins. The fifth and latest chapter was released in 2013 and, after a long hiatus, development has resumed as of 2019.

A playable adaptation of the original creepypasta is now in development with the developers of Blazing Chrome and Cosbydaf's assistance, featuring new content previously unseen in the story. The demo can be downloaded here,

while development livestreams can be viewed here.