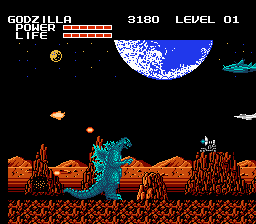 If you look closely at the Earth in the background, you can just make out a familiar looking skull shape among the clouds.
Advertisement:

Godzilla: Monster of Monsters is a video game on the Nintendo Entertainment System developed by Compile and published by Toho in Japan on December 9, 1988. It was released in the US on October 1989, and released in Europe sometime during 1991. The western versions oddly enough removed all references to Compile and Toho Cenfile-Soft Library, and instead credits Toho Eizo on the title screen.

The game combines elements of Action, Strategy, and Fighting games. The player takes control of both Godzilla and Mothra and must move them across several hexagonal boards to reach the teleporter base at the end of each one. As the player moves their monsters through the board, they must play through several action levels dependant on the hex types the monster moves through. Standing in their way are the various enemy kaiju; both the player and the enemy side take turns in moving their monsters, and if their monsters meet, a battle ensures that lasts either 40 seconds or until one of the combatants fall. If the 40 seconds are up, the game returns to the board and the current turn ends.

The game fell into relative obscurity, but interest was renewed after the NES Godzilla Creepypasta was published by Cosbydaf, which focuses on a strange, supernatural copy of the game.

The flying drill battleship Gotengo and the anti-nuclear accident vehicle Super-X also appear as enemy ships, with the Gotengo being one of the possible mid-bosses in the Subspace map tiles and the Super-X bombarding the player from the top of the screen.