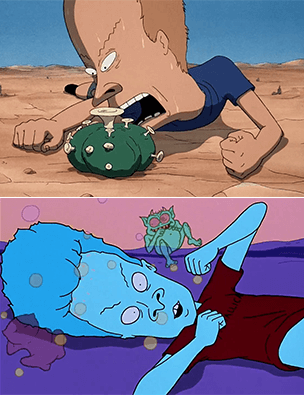 Use of mind-altering substances distorts the world. Sometimes, the hallucinations are passed off as a side-effect of overconsumption of an otherwise legal and legitimate foodstuff such as sugar, ice cream, chocolate, or steak sauce.

What makes this trope generally different from Intoxication Ensues is the hallucinations. The narrative might jump back and forth between the hallucination and the real world to show they are holding a normal, intelligent conversation with a plant. Typically great comedic fodder with a believable setup. If it's animated, expect those affected to Open the Iris.

If it doesn't contain An Aesop about the dangers of drug abuse with, it tends to just show off a character's carelessness. May involve a G-Rated Drug. Hallucinations caused by alcohol go under the subtrope Pink Elephants. See Acid Reflux Nightmare for a food-related version. See Chemically-Induced Insanity for cases where the character is stealthily or forcibly dosed in order to cause derangement. Sometimes leads to a Disney Acid Sequence. If it's a whole group of people experiencing it simultaneously, it's Everybody Must Get Stoned. See also Through the Eyes of Madness and Drunken Montage. Also often tied into Drugs Are Bad.

This trope is usually subject to Artistic License – Pharmacology, as writers tend to wildly exaggerate the effects of psychedelic drugs such as shrooms and LSD. While they do produce visual distortions, they won't make you see anything like talking unicorns. Ego death

(the loss of your sense of self, creating the feeling of being connected to the Universe) has a much bigger impact in a psychedelic drug trip than hallucinations, but is rarely portrayed in this trope.