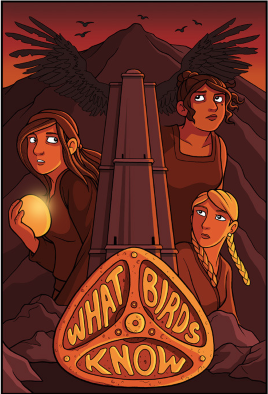 "Birds alone have seen it all..."
Advertisement:

is a fantasy webcomic written by Emelie Friberg and Mattias Thorelli, launched in November 2005 and initially updating weekly (in multiple pages), though the schedule became less regular. The comic ended in August 2017. It follows three teenage girls from the town of Ev-la Nin who become caught in a mysterious and surrealistic adventure in the forest.

Vandi is the serious and reliable one, forced at an early age to take responsibility for her twin brothers due to her mother's near-death from childbirth. Dores is the artist and dreamer, disillusioned by the greater popularity of her brother, Ian. Elia is the kind, carefree girl, who has a crush on Ian and whose single mother is secretly a prostitute.

On a school outing to gather mushrooms in the forest, the three friends encounter a mysterious tower at the edge of a mountain. Passing through it, they encounter a world subtly altered from what they know. Bizarre trees and rocks dot the landscape. There's a town in the distance that looks like a mirror of their own, yet crumbling and overgrown. Their own behavior seems to be affected by this world: Vandi becomes obsessed with safety and has bizarre hallucinations, Dores becomes extremely standoffish and rude, and Elia goes into fits of hysterical laughter. Strangest of all, the girls begin to lay... eggs.

Overwhelmed by the strangeness, they flee back through the tower, to find that all the changes are undone, except that the egg Elia carried back has turned to gold. Greed overcomes them and they turn back to lay as many eggs as possible before returning to town. As the townsfolk begin to wonder what has happened to them, their interpersonal conflicts grow. But then the adventure takes a turn more serious than anyone could have imagined.

In addition to the surreal elements, What Birds Know features strong themes of growing up: the loss of innocence and disillusionment with childhood dreams. In particular, once the core conflict develops, a major portion of the story is told via flashbacks.