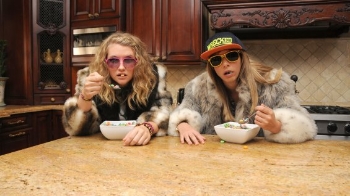 Idiotsitter is a six-episode web-series on Comedy Central's website, made by Jillian Bell (from Workaholics) and Charlotte Newhouse. Written by the pair, and filmed in six days (!), the two play, respectively, Gene and Billie, a smart unemployed woman hired by Gene's parents to help her pass her GED as part of a court agreement for Gene's crimes. Idiotsitter premiered in 2014, and can be found here

The series documents Billie's struggles with the slacker, drug-using Gene as the two form an unlikely, and often antagonistic, friendship. The series also stars Stephen Root as Gene's father, and features T.J. Miller as her "best non-sexual friend" Chet, along with the character of Tansy, Gene's ditzy young step-mom. Laced with profanity, casual drug use, and occasional violence, the series is definitely not kid friendly, but will probably appeal to fans of Workaholics.

A Live-Action show has premiered on Comedy Central on January 14, 2016