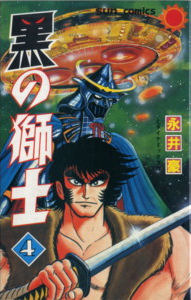 The OVA tells the story of Oda Nobunaga, a 16th-century warlord intent on conquering all of Japan. With the help of time-traveling aliens from the future, he is able to further his goals with Jinnai, an invincible cybernetic samurai who hates ninjas. With these unconventional allies, the victory of the warlord and his mechanized army seems all but assured.

Enter our young hero, Ninja Shishimaru, the sole survivor of a battle where his girlfriend and comrades are killed by Jinnai. The story follows his quest for revenge, as he faces hordes of mechanized enemies, evil samurai and aliens, with the help of a formerly hostile sect of fellow ninjas.