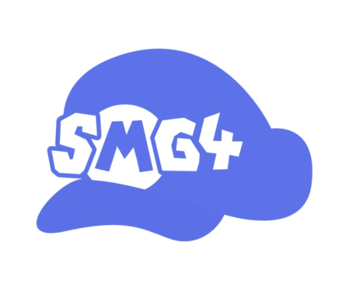 Kicking ass and losing IQ since 2011!
"If I could describe SMG4, it's if you got Mario and dropped him into a barrel of acid, then he comes crawling out as this demented monster, constantly humping spaghetti. It's really uh... a magical channel, I guess you could put it."
— Luke Lerdwichagul, 2020

, officially shortened as simply SMG4, is a Super Mario 64 Bloopers series created in 2011 by Luke "SMG4" Lerdwichagul (later assisted by his brother Kevin Lerdwichagul and their company Glitch Productions). This series, compared to the other Super Mario 64 Bloopers that inspired it, was notable for being much crazier and chaotic as it chronicled the insane misadventures of the eponymous "meme man" SMG4, a dumber spaghetti-obsessed Mario and their many friends.

Earlier bloopers were Nintendo-related parodies which primarily featured the main Mario cast (and Steve from Minecraft), along with SMG4 and several other Super Mario 64 YouTubers. Later videos sideline most of the older characters to bring in newer, more fleshed-out Original Characters and focuses on original lore that distances itself from the Mario series.

The series has two special events: the annual War of the Fat Italians, where SMG4 and Mario (later installments include others too) face off in challenges submitted by the fans; and SSENMODNAR, a collection of random short skits made and submitted by the fans and/or SMG4 himself as a part of a Milestone Celebration. In 2018, the series would introduce Story Arcs with darker and serious tones, Character Development and overreaching plots, which have also lead into a series of feature-length Big Damn Movies.

See also Guards N' Retards, a spin-off featuring 2 guards named Chris and Swagmaster animated in GoldenEye (1997), Sunset Paradise, a spin-off featuring Breakout Character Meggy Splezter fighting crime on vacation in an original art style and Mario Does Things, a spin off with Mario doing let's plays and reaction videos. Related is Meta Runner, an entirely separate series whose protagonist, Tari, debuted in this series first as Production Foreshadowing for Meta Runner about 3 months prior to its official announcement, with her remaining a main cast member due to fan popularity.

"Goddammit, Mario! Look at all of these tropes!"

Shroomy steps out of the elevator, introduces himself, then pulls out a hand-made rocket launcher he crafted in boy scouts and kills Mario.

Shroomy steps out of the elevator, introduces himself, then pulls out a hand-made rocket launcher he crafted in boy scouts and kills Mario.