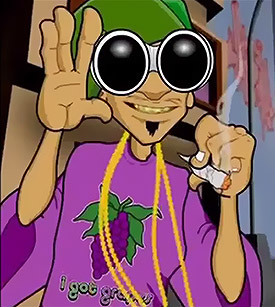 "Hold up. Let me spark this; take a breather; breathe that reefer in my lungs, I got grapes what you watching son?"
"Life's a bitch and then you die
That's why we get high."
— Nas, "Life's a Bitch"
Advertisement:

The stoner is generally a comical character who smokes, gets beat up, makes bad jokes, and suffers other sorts of Butt-Monkey type things, only with more drugs. Almost always denoted by their Dreary Half-Lidded Eyes in animation, if his eyes aren't noticeably bloodshot to begin with. The most likely character to get a Mushroom Samba bit. He is basically a cross between Butt-Monkey and the wacky guy. Usually somewhere between a technical and an Actual Pacifist, and almost always entirely non-threatening, in physical appearance. May very occasionally be prone to getting dangerous, but only rarely and under truly exceptional circumstances.

The stoner is very similar to the 19th Century "funny drunk." However, that became a Discredited Trope as groups like AA and MADD gained influence. The modern stereotype is that drunks are likely to beat you up, while stoners aren't, so stoners make better comedy. When played for drama, they are likely to be burnout losers living dead-end lives with no ambition or meaningful aspirations beyond getting high.

Not to be confused with The Atoner. One key away means a whole different thing...note Man, the way I killed those orphans was totally uncool, man!

May evolve into an Erudite Stoner. If the character fits the type but is never shown actually imbibing, that's a G-Rated Stoner. See also The Slacker and Surfer Dude for related character types. Compare Granola Girl, New-Age Retro Hippie, and Mellow Fellow.

Otto gets stoned at the Hullabalooza festival and discovers Peter Frampton's guitar isn't the only thing that can talk.

Otto gets stoned at the Hullabalooza festival and discovers Peter Frampton's guitar isn't the only thing that can talk.