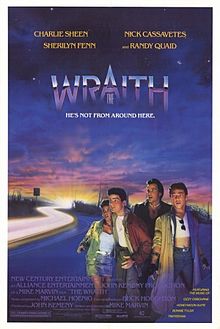 None of these people ever show up in the movie.
Advertisement:

Charlie Sheen stars in a film about death races.

The Wraith was made in 1986 starring, alongside Sheen, Nick Cassavetes, Sherilyn Fenn, Randy Quaid and Clint Howard.

Sheen plays Jake Kesey, a mysterious motorcycle-riding drifter who catches the eye of local girl Keri Johnson (played by Fenn), in an Arizona town. In doing so he runs afoul of a group of Road Pirates led by Packard Walsh (played by Cassavetes), who make their living by challenging locals to drag races, using their cars as collateral and chop-shopping their winnings. Packard himself is a psychopathic Crazy Jealous Guy that everyone fears and claims Keri as his property. An unidentified car and its armor-clad driver challenge the gang, one by one, to a race ending in their death. Sheriff Loomis (played by Quaid) investigates these deaths not only in hope of catching the killer, but also as a means of catching Packard in the act. It all begins to unravel as the connection among Keri, Jake, Packard and the mysterious driver becomes clearer as Packard is the last on the chopping block.

Tropes Associated with The Wraith

Not to mention, when Packard finds them walking and Skank tells him "We... uh... had a little trouble with the 'Cuda." Packard's response is simply a silent sigh and an eyeroll.