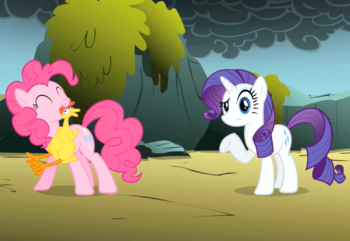 Pictured above, this trope (left) and a completely different curl trope (right).
Advertisement:

Characters with elegant Regal Ringlets are refined and high class, but characters with tightly coiled, all over the place curls tend to be the opposite. Where ringlets are large, sleek coils that look like they were made with a huge curling iron, Quirky Curls tend to be rendered as zig-zagging kinks which stick out all over the place, much tighter than their more elegant counterpart and are prone to frizzing.

This type of curly hair, especially in girls, represents non-conformity or high energy. These characters are the type to march to the beat of their own drum, sometimes on purpose, other times because they simply feel they don't fit in. They may be quirky and fun, rebelling against expectations, or just eccentric or different. There also seems to be a correlation with this type of hair and being nerdy or intelligent, which contrasts popular girls having long straight hair, and too add to their 'differentness' is not uncommon for characters with Quirky Curls to also have glasses or freckles. If in a fantasy work, if a character has very tight zigzaggy curls they may have lightning or fire powers, or if they have softer waves, they may have water magic.

They may try everything they can to get sleek, straight hair, possibly representing a desire to fit in or be popular. Often there will be a scene where they try to tame their wildly curly hair but as soon as they have it smoothed down, it poofs up again.

Compare Nonconformist Dyed Hair, Messy Hair and Unkempt Beauty. When a character only has one weird curl, it's probably an Ahoge. Contrast Regal Ringlets, Ojou Ringlets, Mega Twintails. This hairstyle was one of the defining styles of the eighties.