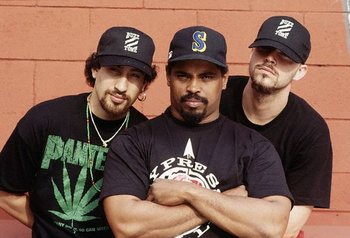 Cypress Hill are a Hip-Hop group known for, among other things, lead rapper B-Real's high nasal voice; being one of the first majorly successful Latin American rap groups; pioneering the fusion of rock and rap; and the amount of lyrics they've produced devoted to promoting the consumption and legalization of marijuana. Also notable for cartoonishly over-the-top depictions of urban deprivation and violence, with no attempt to morally justify the actions in their songs.

"Tropes from the Bong":