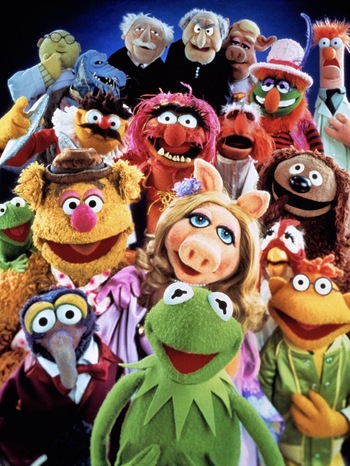 The long-running puppet show franchise created by Jim Henson, starring his cast of characters. For the type of puppets themselves and others inspired by them, see the Muppet trope.

The exact definition of the franchise is fuzzy, as it can refer to either the whole thing—including The Muppet Show, Sesame Street, and Fraggle Rock—or just the former series and other works in its universe. Note that legally speaking, "The Muppets" now only refers to the Muppet Show characters owned by Disney, although Sesame Workshop also has permission to use the term to refer to its Sesame Street characters. The Fraggle Rock characters (still owned by the Henson company) were designated as Muppets to start with, but are no longer referred to as such. For further details, see the Muppet Wiki

(which very much includes Henson works that are not part of the franchise such as The Dark Crystal).

Other series:These do not feature the characters from The Muppet Show and following (save for Kermit in the first two), but were made by The Jim Henson Company and with the characters originally referred to as Muppets:

Specials not starring the standard Muppet cast: (although Kermit introduces, narrates or appears in several)

In other shows (Muppet Cameo):

People involved in the Muppets franchise

The main members of The Muppet Show cast include:

"You are all weirdos!"

Sam the Eagle's iconic quote, has become a bit of a meme due to its usefulness.

"You are all weirdos!"

Sam the Eagle's iconic quote, has become a bit of a meme due to its usefulness.