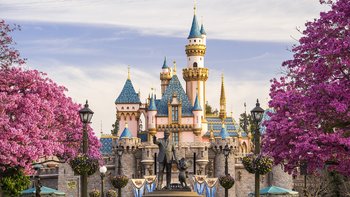 "I think most of all what I want Disneyland to be is a happy place...where parents and children can have fun...together."
note Sleeping Beauty Castle, the icon of Disneyland Park... but, c'mon, you already knew that. In front of it is Partners (Blaine Gibson, 1993), the copper statue of Walt Disney and Mickey Mouse holding hands.
"To all who come to this happy place, welcome. Disneyland is your land. Here age relives fond memories of the past, and here youth may savor the challenge and promise of the future. Disneyland is dedicated to the ideals, the dreams, and the hard facts that have created America... with hope that it will be a source of joy and inspiration to all the world."
— Walt Disney, Disneyland dedication

The Happiest Place on Earth and the quintessential Disney theme park.

By 1940, Walt Disney was achieving fame in the field of animation. He had released the world's first full-length animated feature to great success and Mickey Mouse was a household name. Then one day, he was taking his daughters to Griffith Park in Los Angeles. As he watched them riding on a merry-go-round, he hit upon the idea of an amusement park where children and their parents could have fun together. Years later, interest emerged in a "Mickey Mouse Park," and people wrote to him asking if they could tour his studio. Always the visionary, Walt knew this was simply too small, and the rest is history.

Opened on July 17, 1955, Disneyland Park in California was created by Walt Disney. The park was created as a place for him to bring his movies to life in a family-friendly environment. The park had a very rough opening daynote The park was filled with twice the expected attendance but it became successful anyways. The park celebrated its 50th anniversary in 2005 with the "Happiest Homecoming on Earth." It is currently the second most visited theme park in the world, the only one ahead of it is its sister park Magic Kingdom in Florida.

In 2001, it expanded into Disneyland Resort with the opening of a second theme park: Disney California Adventure Park.note Previously Disney's California Adventure Park; note the possessive. Besides the second park, the resort is home to Downtown Disney, a shopping and dining complex that was named after the one in Florida,note that one has since renamed to Disney Springs as well as three hotels. The first is Disneyland Hotel which opened with the park. The second hotel is Disney's Grand Californian Hotel & Spa, designed to evoke an early 1900s craftsman style of architecture. And the third hotel is Disney's Paradise Pier Hotel (previously the Emerald Hotel and later as the Pacific Hotel until Disney bought it in 1995 as a way to expand the Disneyland complex and renamed it into the Disneyland Pacific Hotel) which overlooks the (formerly) similarly titled section of California Adventure. 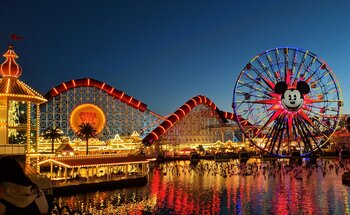 Pixar Pier, with the Incredicoaster and the Pixar Pal-A-Round, the current marketing icons of Disney California Adventure
Disney California Adventure Park, built on a former Disneyland parking lot, was initially themed as a celebration of the titular state (and subsequently criticized as redundant, and maligned for some cheaply produced attractions such as Superstar Limo). The park has received significant overhauls to introduce more Disney theming and now features a number of E-ticket attractions in its own right. Unlike (most of) Disneyland Park, alcohol is sold throughout California Adventure, and the park plays host to an annual Food & Wine Festival much like the one in Epcot. It contains eight themed areas.

Tropes relating to the resort and its attractions:

Alpharad and friends race towards their final ride of the Disneyland challenge (where you ride all the rides in Disneyland plus California Adventures in a single day), the clock struck midnight, signalling the closing of the park. At first, Alpharad believed this was it, playing it up like a very bittersweet ending... when his tour guide reveals that the staff are obligated to give the people still in line when the park closes one last ride.

Alpharad and friends race towards their final ride of the Disneyland challenge (where you ride all the rides in Disneyland plus California Adventures in a single day), the clock struck midnight, signalling the closing of the park. At first, Alpharad believed this was it, playing it up like a very bittersweet ending... when his tour guide reveals that the staff are obligated to give the people still in line when the park closes one last ride.