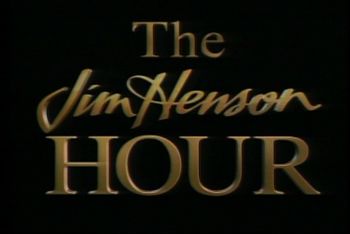 The Jim Henson Hour was Jim Henson's last television series, and aired on NBC from April 14, 1989 to July 30, 1989, and on CBC in Canada. The first half of most of the hours was 'Muppetelevision', with the second half a half-hour special showcasing what else Henson could do with puppetry (and one Muppet special, Miss Piggy's Hollywood). Several episodes of The Storyteller that hadn't yet aired in North America were originally aired here, as was the one-off special Dog City, which inspired a TV series of the same name. One character named Clifford would go on to appear in other Muppet productions, such as hosting Muppets Tonight and appearing in Muppets from Space.
Advertisement:

Unfortunately, it failed to catch on. Executive Meddling resulted in a far less structured show than Henson had in mind, leaving audiences confused, and the new Muppets were largely a disappointment. A common refrain from critics was that people should skip the first half of each episode, and only tune in for the Storyteller segments. As a result, critics gave the show mixed reviews (being especially harsh towards the first half of the show), and it ended up being a total ratings failure. Twelve episodes were produced, but the ratings were so bad that NBC cancelled the show after only five episodes had aired. Four of the remaining episodes were burned off that July. Two more episodes premiered as stand-alone specials on Nickelodeon in 1992 and 1993. The last episode aired in the United Kingdom on December 30, 1990, but never aired in the United States. Japan got the series only as a one-off special in 1992 on NHK, under the title Jim Henson's Fantasy World.

See the Dog City page for tropes from that special.