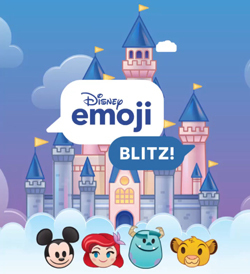 Disney Emoji Blitz is a free-to-play Match-Three Game and mobile keyboard app on iOS, Android, and Windows 10 devices originally developed by Disney Interactive. It was released for the first two platforms on July 14, 2016, while the Windows 10 version was released December 21, 2016 (although the Windows version has since been discontinued). In February 2019 development of the game was transferred to Jam City.
Advertisement:

The game is your typical match-three game where players have to swap emojis modeled after famous Disney and Pixar characters on a seven-by-seven grid. You select a character as your main emoji for a game, while four other emojis are randomly selected to be added to the grid for each game. As the "blitz" in the title suggests, you have to swap as fast as possible to get high scores. As you match rows and columns of emojis, new emojis will fall down from the top and one of two meters will fill up. Matching emojis based on your selected character will fill a meter that allows you to use your emoji's special power, while matching other emojis will fill a separate "blitz meter" which, when full, triggers "Blitz Mode". During "Blitz Mode", you earn a few extra seconds of gameplay, and one set of the four random emojis will be cleared away. You will score bonus points for each match you make during the mode. You may also want to look out for item emojis to collect, and bring those down to the bottom row before time runs out—more on that later. You will earn coins to spend and have the point values of every emoji you've unlocked so far as you play games over time.

During gameplay, matching more than three emojis will give you power-ups:

You can decide to spend coins for boosts before each game, including five seconds of extra time, your emoji's power ready-to-use at the start of the game, item emojis doubled, starting the game in Blitz modenote this power-up replaced one that gave a ten percent score increase or all instances of lightning replaced with sunshine.

So yeah, the gameplay is pretty much typical. However, the real reason to play this game is for its keyboard feature, allowing you to use Disney and Pixar-themed emojis* They're not "real" emojis, however. Actual emojis use the Unicode

standard; Disney's "emojis" are actually pasted as PNG images so everyone can view them as they are. in messages, but you can only use the emojis you've unlocked in the game. Want to send an SMS with the Fab Five smiling together? You have to play the game to get them all. Those items we mentioned earlier? You have to complete "item collections" to use them, and you have to collect multiples of each item emoji in the sets. Hope you got the right character to unlock those gold items quickly, but hey, at least you also get prizes for completing these sets, too.

You can download the game from the App Store here,

or the Microsoft Store here.

Characters
There are two main kinds of character emojis: Silver Box emojis and Gold Box emojis. You earn either one of them by spending coins at the Emoji Shop, although you can sometimes win them. Silver Box emojis cost 15,000 coins, and Gold Box emojis cost twice that at 30,000 coins. All characters are unlocked at random, though you do get to decide between Sulley, Ariel and Simba as your first emoji. Mickey is also going to be your first unlocked emoji, regardless of who you pick first.

There are also two kinds of special emojis. Villain Box (Purple Box) emojis that can only be earned through special events where emojis fight against a villain during games by collecting certain items. Playing as certain emojis during these events double the items collected. Their power levels only go up to two during these events, but they don't max out there. Rainbow Box emojis can only be earned through certain other means.

There are also limited-time Diamond Boxes, which guarantees you certain Silver Box or Gold Box emojis or has to be opened for certain limited-time Rainbow Box emojis, but you'll have to pay 200 Gems (the game's premium currency) to open those.

Story Boxnote Emojis based on moments of the movies. Added with some emojis moving to this catagory in June 2020

This mobile game contains examples of: