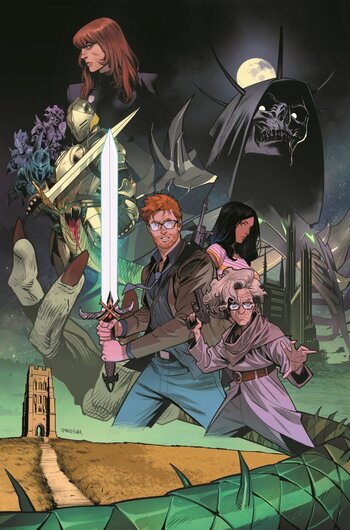 King Arthur will return in Britain's Darkest Hour... but no one said he wouldn't cause it.
"Oh. Hell. It's all real. "
"Ptth. You're just as bad as Duncan. It's not real, it's just true."
—Rose and Bridgette on the nature of stories
Advertisement:

A certain relic has been excavated in Cornwall, Britain. The sheath of a sword. Fifth, sixth century. Ornate, immaculately preserved. Fit for a king. Priceless. So valuable that a woman and her ultra-nationalist lackeys will kill for it.

Meanwhile, Duncan McGuire thought his night couldn't get any worse. His first date with a new girlfriend, a lovely young woman named Rose Chandra, and he starts it by spilling wine all over his date's white dress. But then he learns his gran, Bridgette McGuire, ran away from the nursing home before calling him out to the middle of nowhere. There he learns that she was a vampire hunter in her youth with an entire armory of monster-killing weapons. One thing leads to another, and it isn't long before she's holding him at gunpoint to take her to Glastonbury.

The scabbard of King Arthur's sword has been found, and Bridgette fears that someone will be trying to resurrect him. It's said King Arthur will return in Britain's Darkest Hour, but never trust a prophecy that can be taken in two ways. After all, it never said anything about him rescuing Britain... Let alone that this Britain is ruled by Arthur's old enemies, the Anglo-Saxons, by now.

Once & Future is an adventure-horror comic book written by Kieron Gillen with art by Dan Mora for Boom! Studios. Swept into the stories of myth, Duncan must fight the greatest legends of Britain alongside his octogenarian vampire hunting grandmother, all while learning more about his family than he ever wanted to know.

Once & Future contains examples of: