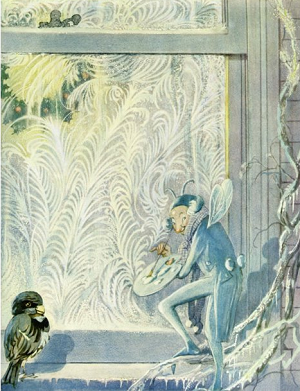 Jack Frost, Window Painter, Oliver Herford (1926)
"He's nipping at your nose
You can feel him in your toes
A shiver and a tear
Lets you know Jack Frost is here!"
— Pardon-Me-Pete, Rankin Bass' Jack Frost
Advertisement:

He is often depicted as an elf or spritelike creature who is the active creator of winter weather and phenomena, and can be involved in activities ranging from stirring blizzards into existence to carefully painting frosty designs on individual windows. Where he goes or what he does during the warmer seasons is rarely addressed. In personality, he can vary considerably from work to work; he can be as playful and mischievous as a snow day, or as cruel as the killing ice.

Rise of the Guardians

Rise of the Guardians