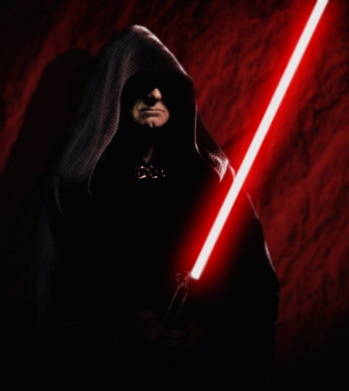 Hood or no hood, the universe knows who this guy is!
"They should be good men, their affairs as righteous. But all hoods make not monks."
— Queen Katherine, Henry VIII
Advertisement:

Somebody needs to disguise their identity and/or avoid attracting attention. Their solution? Wear a Black Cloak with a really big hood. Because nothing diverts attention away from oneself better than a big, creepy, black cloak that makes you look like the Grim Reaper. In modern times, however, a hoodie is a good substitute.

Of course, the physics of this attire choice are subjected to Rule of Cool. The hood will obscure their face (or at least from the mouth or nose up) in shadow, regardless of whether it is long enough to actually do so; and if it is, the eyes will be often completely covered by the cloth, making one wonder how they manage to actually see anything. In addition, the hood will never fall off accidentally, even if the wearer is fighting a Wind Mage in the middle of a typhoon.

Yes, wearing a hood during a fight isn't a good idea because it constricts your peripheral vision, but who cares as long as it looks cool? Besides, being mysterious is badass. Even more besides, no one has peripheral vision anyway.

Sometimes the character in question will have Glowing Eyes to contrast with their obscured face, resulting in Shadowed Face, Glowing Eyes.

Video game designers of older days liked the trope because throwing an all-concealing hood (or suitable replacement) over an unimportant or "mysterious" character meant that they could skip on actually animating the character's speech.

This can be a Justified Trope if in a Wretched Hive or Bad-Guy Bar, where this is a perfectly acceptable fashion accessory. Though it shouldn't be confused with a Hood Film, you can expect to find it there, too. It also works if you are pretending to be a monk.

Compare Eye-Obscuring Hat. Contrast with the Cool Masks worn by superheroes, which disguise them by making them look more conspicuous. When not, see Malevolent Masked Men.