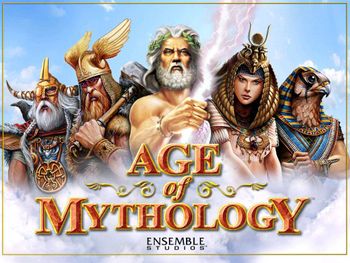 Left to right: Odin, Thor, Zeus, Isis and Ra. Not pictured: Kronos, Oranos or Gaia and Shennong, Fu Xi and Nü Wa
Wonderita: So isn't it weird for two people of conflicting theological origins to hang out all night?
Wonderella: Nope!
— The Non-Adventures of Wonderella on teaming up with

So, it turns out that All Myths Are True; you can have breakfast with the God of Thunder, chat it up with the Anthropomorphic Personification of Dreams, or even have a heart to heart with The Grim Reaper. All the while remaining totally un-conflicted about remaining faithful to the Big Guy Upstairs or whichever major religion the characters follow; even Crystal Dragon Jesus can hang with the Powers That Be and get a high five.

A Crossover Cosmology is different from All Myths Are True in that many of the cosmologies involved are themselves mutually exclusive either in world view, history, philosophy, or all of the above. The issue becomes especially thorny when polytheistic religions with large pantheons are mixed with monotheistic religions and reincarnation-based belief systems. It's rarely inadvertent, either. Black Adam getting his power from the Egyptian gods whereas his successor Captain Marvel gets them from the Greek gods (and one Biblical figure) wasn't a slip-up; neither was making both Hercules and Thor superheroes. Writers have no problem doing this to "pagan" gods, and outside the mainstream they don't have much trouble doing it to the Abrahamic God

This can be justified from the characters' viewpoint by having them point out that there's no reason they should believe that, say, Thor is a god in the same sense Yahweh is, when there are people who are flying around and summoning lightning, or are even immortal, who are plain old Mutants, metahumans, or aliens. There are even stories where a pagan god or gods convert to one of the Abrahamic religions and worship Yahweh themselves, which to human characters would be even further proof that they're not the same sort of god.

When taken to the extreme end of the Sliding Scale of Idealism Versus Cynicism it may result in a Cosmology where local deities are weak and irrelevant and Eldritch Abominations and other ancient nasties can and do casually traipse over any local deities' shrines and followers. Even in more optimistic portrayals, one has to wonder at the fairness of a universe that allows Galactus, Darkseid, Anti-Spirals, and Imhotep to exist.

Some belief systems work like this; the term "henotheism" exists to describe the belief that all gods exist, but one's particular god is superior. Of course, most people who ascribe to this don't have said gods playing croquet in their backyard. In fact, quite a few non-Abrahamic religions worked this way, as did early Judaism. The Romans believed in Jupiter, and the Egyptians believed in Ra, but the Romans didn't think believing in Ra was wrong, just not for them; they were fine with any kind of worship as long as you skipped Human Sacrifice and paid proper respect to the gods they did recognize. They experienced some amount of confusion in this regard when trying to take over Judea.

Another option is "syncretism", where you conflate two religious concepts. The Romans did this as well by occasionally claiming other peoples' gods were their gods under different names or by combining earlier strictly Roman gods with foreign gods, hence for example, the "Gallo-Roman" god Apollo Sucellus (combining the Roman sun god with a Gaulish god of agriculture), or Tacitus writing that the Germanic tribes worshipped Hercules (Donar) and Mercury (Woten); this is why certain Roman and Greek gods are all but interchangeable today.

Variations on the Romans' logic are quite popular in attempts to resolve the massive Continuity Snarl created by multiple similar pantheons coexisting, especially since the myths have often evolved from common ancestors. The Magic Word in this case is "aspect" — deities who closely share an archetype (say, Ares and Mars) are really aspects or interpretations of the same god. This even crops up within a lot of religions, with Ehecatl being an aspect of Quetzalcoatl, and Kali being (sometimes) an aspect of Parvati. Monotheistic religions either worship the single ur-God of which all gods are aspects, or they only worship one of them.

Gods Having Lamb for Dinner

Alternative Title(s): Mix Of Everything

Gods Having Lamb for Dinner