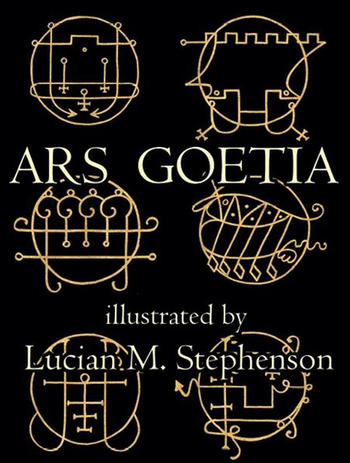 The first section of the anonymously written 17th-century grimoire The Lesser Key of Solomon. It describes a group of 69-72 demons (depending on which edition you're working with) who were variously bound by Ham and Solomon to perform works on God's behalf, and now you, the lucky conjuror, can do the same. The Ars Goetia (or rather, the demons described) is/are frequently used in fiction. The grimoire itself is sometimes known as the Lemegeton and is a Stock Shout-Out for a Tome of Eldritch Lore. For some reason, the later portions of the Lesser Key, like the Ars Theurgia Goetia (conjuring neutral spirits of the winds) and Ars Paulina (conjuring lesser angels of the zodiac and the hours of the day), get much less screen time in general.
Advertisement:

The book can be found translated here.

For quick reference, here's the seventy-two demons as listed in the Lesser Key:

The Usual Suspects
Note: Due to the nature of having several different translations over the centuries, expect to see alternative spellings a lot.

On a side note, the earlier Pseudomonarchia Daemonum by Johann Weyer note a section of the larger text De praestigiis daemonum in which Weyer argued that witchcraft did not exist and that "witches" were actually just mentally ill in 1583 lists only 69 demons. Vassago, Seere, Dantalion, and Andromalius are not listed, and another demon, Pruflas, is listed. Pruflas doesn't seem to appear anywhere else; given his description, he may have been conflated with the extremely similar Andras. Liber Officiorum Spirituum

which Weyer gave as his source for Pseudomonarchia Daemonum has over 80note varying depending upon the manuscriptm and sometimes including explicitly non-demonic beings like faeries as well, and in turn the even earlier Livre des Esperitz

had only 47 while notably only describing the demons and their place in the hierarchy of hell, with no actual magic instructions.

NOTE: Given how often they pop up outside of the lists, especially in sources that predate the lists, it probably isn't a good idea to list anything involving Belial, Asmodeus (also known as Asmoday), Bael, Astaroth, or Berith (as in Baal-Berith), unless there's a definite link in the example to the Ars Goetia, or at least to the other demons from the lists.

Common Ars Goetia tropes
See this subpage for a list of references to Goetian demons in other works. And if you're looking for the fanfiction of the same name, you can find it here.