A Form You Are Comfortable With 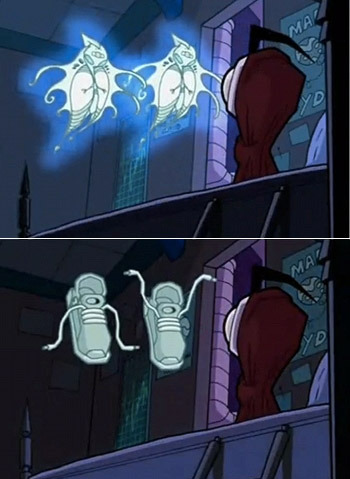 In the '70s, aliens appeared as sandals.
Joan: Are you — Are you being snippy with me? God is snippy.
God: Let me explain something to you, Joan. It goes like this: I don't look like this. I don't look like anything you'd recognize. You can't see me. I don't sound like this, I don't sound like anything you'd recognize. You see, I'm beyond your experience. I take this form because you're comfortable with it, it makes sense to you. And if I'm "snippy", it's because you understand snippy.
— Joan of Arcadia
Advertisement:

Sometimes, when God or some other vastly powerful or very strange Cosmic Entity needs to have a chat with mere mortals, they are aware that the meeting might be a little too overwhelming for the human to handle. Sometimes the non-human being isn't so powerful, but still has a Masquerade to maintain. Or they fear having to deal with hours of questions and a great deal of prejudice; humans tend to flip out when they see a dragon or learn that fairies are real.

In many cases, the nonhuman being will appear in the form of something, usually a humanlike form, that the human can wrap his head around, because not doing so might ruin the point of the entity talking to the humans in the first place.

Of course, the practical reason for this trope is that it is easier (and more realistic) to cast Morgan Freeman as God than it is to figure out what God really looks like. For added effect, the cosmic entity may also rearrange the local environment into a place the human is comfortable in, just to be extra accommodating—or because the unaltered environment is an Eldritch Location that would be just as dangerous or distracting as the being's unaltered form.

This is a common practice among Sufficiently Advanced Aliens, along with Translator Microbes, to allow full communication. Compare how Heaven tends to be this way for observers/visitors. See also You Cannot Grasp the True Form. There is also some crossover with Shapeshifter Default Form. Also compare the Humanoid Abomination, which stumbles unintentionally into A Form You Are Uncomfortable With.

Related to Lies to Children, especially if the form taken is in some way representative or symbolic of the thing's true nature. Contrast They Look Like Us Now and Prefers the True Form. See also God in Human Form and Interface with a Familiar Face.