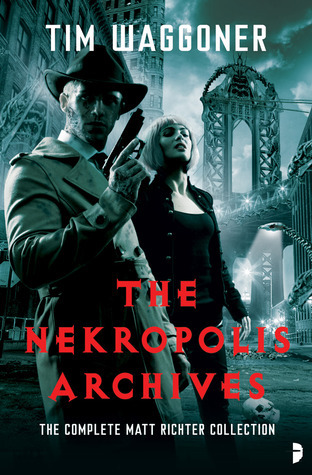 The Nekropolis Archives is a series by Tim Waggoner consisting of a number of novels and short stories.

Supernatural beings called the Darkfolk once shared the Earth with humans. However, centuries ago, they decided that humanity was becoming too numerous and too dangerous. Under the leadership of Father Dis, the Darkfolk decided to migrate to another dimension, a realm of perpetual darkness. There, they created the vast city of Nekropolis: a place where the creatures of the night could thrive and rule beneath the eternal twilight of the shadowsun. Dis divided the city into five Dominions, each to be ruled by the most powerful representative of a Darkfolk race: Gothtown, ruled by Darklord Galm of the Bloodborn; the Sprawl, ruled by Darklord Varvara of the Demonkin; the Wyldwood, ruled by Darklord Amon of the Shapeshifters; Glamere, ruled by Darklord Talaith of the Arcane; and the Boneyard, ruled by Darklord Edrigu of the Dead. With the Nightspire of Father Dis at the center of the city and the burning river Phlegethon surrounding it, Nekropolis has been able to grow and prosper into a thriving metropolis.

Matthew Richter was a police officer, until he pursued a suspect through a portal that led to Nekropolis. He soon died, but death wasn't the end: he became a free-willed zombie. Now unable to return home, as the preservation spells which prevent his body from rotting only work within Nekropolis, Matt puts his police experience to use as a private detective in the dark city. All he wants is to do a little good in a largely cold and uncaring world; but as it turns out, he might be the only person who can save it from destruction.

The series includes "Disarmed and Dangerous", Nekropolis, "The Midnight Watch", Dead Streets, "Zombie Interrupted", and Dark War. All are collected in an omnibus edition called The Nekropolis Archives.