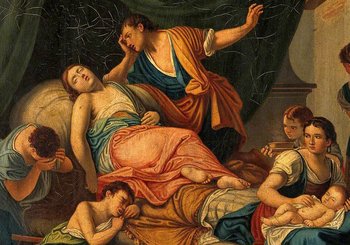 "The Birth of Benjamin and the Death of Rachel," D. Chiesura (crop)
"There was fiddling and dancing, on the day the babe was born
But poor Queen Jane, beloved, lay cold as the stone."
— "The Death of Queen Jane", Child ballad #170
Advertisement:

Parental Abandonment occurs with an overwhelming frequency in fiction. On top of that, an overwhelming number of victims lose their mothers during childbirth. So sad, so tragic, so heart-wrenching...such a goldmine of a plot device. Nothing impossible about it, but the statistics are ridiculously high, especially for any industrialized nations (although, as Jane Austen observed, it was used ridiculously often even before modern medicine).

May be used to set up a tense family situation where the father or older siblings unreasonably blame the youngest for "murdering their mother" and turn him/her into The Un-Favourite. Other times, the dead woman's father and/or mother may accuse her (now widowed) husband of killing her. The new widower may or may not agree with his father-in-law.

In fact, the use of it as a plot device might be Older Than Feudalism, since unless his mother died in childbirth, the protagonist could be burdened with at least six younger siblings.

Notably, in fiction the mother might not stand a chance of living through the childbirth owing to the nature of the child's father being something other than human — more so if the “gestation” involved a Face Full of Alien Wing-Wong and/or if the baby is a Fetus Terrible that follows a Chestburster-style of birth.

The dead mother may become The Lost Lenore for the father, the child her last gift to him. Her death may also be considered a Heroic Sacrifice, with the woman being praised for her strength and valor.

Can double as Death by Sex for a particularly Anvilicious Aesop. Often used in Fan Fiction for shows where Parental Abandonment is never explained. Very often a Truth in Television for at least 70% of the world's population (particularly those parts of the world where modern medicine is not readily accessible). According to the UNFPA in 2005, while the lifetime risk of maternal death for people in 'developed regions' is 1 in 7300, the average worldwide is 1 in 92, rising as high as 1 in 22 women for Sub-Saharan Africa (source

). Note that the per pregnancy risk is lower since many of these cultures also have high birth rates since they also tend to have high infant mortality rates.

Incidentally, dying in childbirth is not pretty at all. Many such stories have a beautiful death that just results in the mother kissing her weeping husband and soon-to-be-motherless baby goodbye. Writers often forget about the screaming, the bleeding, the fever, and the way that this agony could go on for days, and such writers either don't know this or just can't stomach it. It should be noted that some deaths in childbirth are pretty fast — a woman with uterine atony can hemorrhage to death in minutes without emergency medical intervention, but that's a lot of blood.

May be a set up for the Wicked Stepmother, Promotion to Parent or Missing Mom. If the baby dies in the womb, it's a Tragic Stillbirth. If someone other than the mother or baby dies, it's Birth-Death Juxtaposition. Compare Born from a Dead Woman for when the baby is recovered alive after the death of the mother.

This is far less common for stories set in modern times, as medical advancements make dying during childbirth extremely uncommon. However, this still may apply in stories with settings that lack such conveniences.

The Husky and his White Cat Shizun