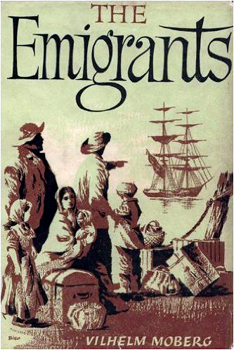 For where you go I go with you.

A novel suite by Swedish author Vilhelm Moberg, considered among the finest pieces of Swedish literature. The books have been translated into more than twenty languages, including English. The series consists of four books:

The suite tells the story of a group of people who became the first in their parish to move from Sweden to the United States during the mid-19th century. They emigrate for a variety of reasons; some to find gold and become rich, some to avoid religious persecution, some to get away from stigmas that follow them in their home parish. But the main focus in the books lies on a family that emigrates to escape poverty.

Karl Oskar and Kristina are a young married couple with an ever growing family who cannot make do on what little farm land they own. Their debt keeps growing, their crops keep failing and their situation keeps getting more desperate. Karl Oskar is very eager to move to America where they can farm as much land as they want and prosper from their hard work but Kristina doesn't want to go. She doesn't want to subject their children to the risks involved, pointing out that they don't know for sure what will happen in America or if they will even get any farm land there. She also reminds her husband that if they move they leave behind everything and everyone and will never get to see their parents, siblings and friends again. But when their oldest child dies from starvation Kristina agrees to move. Coming with them is Karl Oskar's brother Robert, his friend Arvid, Kristina's uncle Danjel and his family, the former town whore Ulrika and her daughter Elin, and Karl Oskar and Kristina's neighbour Jonas Petter.

The four books chronicle the group's journey across the Atlantic, their travels across America until they find a place they can settle down and how they build a new community in the New Land. The large cast of characters allows Moberg to explore several different versions of the dream of the New Land, such as Robert's pursuit of gold and Danjel's desire to freely practice his religious beliefs, but the heart and focus of the story stays with Karl Oskar and Kristina. Karl Oskar loves his new home and all the opportunities it brings, the perfect example of a happy immigrant. Kristina on the other hand never grows to like America and spends her life longing back to Sweden, the perfect example of an unhappy immigrant.

The series has a lot of gut-wrenching moments, with many tragedies befalling the various characters. It gives an honest portrayal of life in the mid-19th century and lets you get to know the characters really well. It is also very funny at times, with some witty dialogue and a character who loves to tell dirty stories. And the love story between Karl Oskar and Kristina is one of the simplest yet most captivating ones ever put on paper.

Two film adaptations were made, one in 1971 (The Emigrants) and one in 1972 (The New Land). The films are in Swedish, starring Max von Sydow as Karl Oskar, Liv Ullmann as Kristina (earned her an Academy Award nomination), Monica Zetterlund as Ulrika and several high ranking Swedish actors in the supporting cast. The films, both directed by Jan Troell, are generally considered among the finest in Swedish film making. For tropes found in the 1971 film The Emigrants, see below. For tropes found in The New Land, see its work page.

In 1995 a stage musical based on the books premiered, titled Kristina från Duvemåla (the English translation is simply known as Kristina), written by Björn Ulvaeus and Benny Andersson of ABBA. The show became a huge success and made stars out of Helen Sjöholm (Kristina) and Peter Jöback (Robert), the former so beloved in the role that she was the only Swedish cast member in the concert version of the English translation (reprising her role as Kristina). The English translation premiered in concert in 2009, getting mixed reviews both from fans of the original and from reviewers who had never seen the show before.

2021 is seeing a remake film coming out (in Swedish, like the original), starring Gustaf Skarsgård as Karl Oskar. It has the under-title The Last Letter to Sweden, like the title of the fourth book, and appears to be covering all four books in one film. Most fans of the original film appear happy with the choice of Skarsgård as Karl Oskar, even though comparisons to von Sydow will be inevitable.

The 1971 film The Emigrants also provides examples of:

The Musical provides examples of: