Film / Elevator to the Gallows 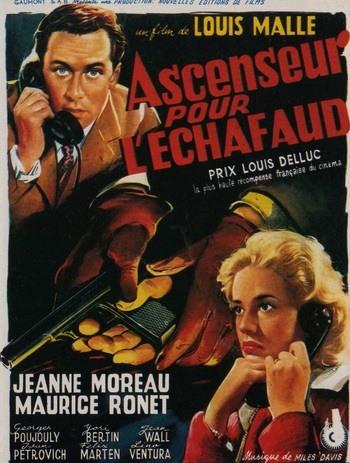 Elevator to the Gallows (French: Ascenseur pour l'échafaud), also known as Lift to the Scaffold in the UK, is a 1958 crime thriller by Louis Malle.

The movie revolves around the plan of a wife (Jeanne Moreau) and her lover to kill her husband. It is at first executed to a tee considering the murder itself. However in the aftermath the plan is thwarted when the lover gets stuck in the titular lift. Later his car is hijacked by the younger couple who while on the ride also kill a couple of the German tourists, the Benckers. The case becomes convoluted. Then a police commissary Cherier played by Lino Ventura enters the film.

The famous soundtrack for this film was contributed by Miles Davis.