Film / The Adventures of Antoine Doinel 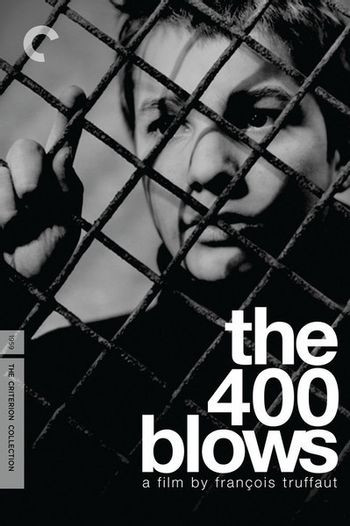 "Oh, I lie now and then, I suppose. Sometimes I'd tell them the truth and they still wouldn't believe me, so I prefer to lie."
— Antoine Doinel, The 400 Blows
Advertisement:

The Adventures of Antoine Doinel are five films directed by François Truffaut which star the same character, the romantic but perpetually naive Antoine Doinel (Jean-Pierre Léaud), from adolescence to his mid-thirties.

The 400 Blows, by far the most famous film in the series, portrays Antoine Doinel as twelve-year-old boy. It's a cruel, melancholy portrait of the private sorrows of adolescence and one of the most deeply personal films ever made. The final scene, after his escape from a juvenile work camp, features one of the most famous shots in the history of French cinema: Antoine, on a desolate beach, finally free, and seeing the ocean for the very first time, but in profound spiritual pain and completely and utterly alone.

The rest of them ... well, imagine if American Beauty had a sequel featuring Thora Birch and Mena Suvari as Manhattan fashionistas vying for the affection of Matthew McConaughey. Despite the whiplash, all of them (except maybe Love on the Run) are considered worthy successors, and Stolen Kisses is considered nearly on par with The 400 Blows. In order, the films are: