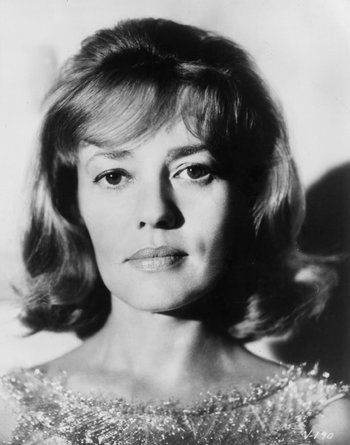 Jeanne Moreau (January 23, 1928 – July 31, 2017) was a French film and theater actress. Orson Welles, who directed her in three films, once called her "the greatest actress in the world".

After starring in Louis Malle's Elevator to the Gallows, she started acting in the films of the new generation, working with directors such as Jacques Demy and François Truffaut. Her performance in Truffaut's Jules and Jim turned her into an icon of the French New Wave. She would also go on to work with with foreign directors such as Michelangelo Antonioni, Rainer Werner Fassbinder, and Wim Wenders. While appearing mostly in French cinema she was fluent in English, as shown when she flawlessly handled Shakespeare's dialogue as Doll Tearsheet in Chimes at Midnight.

She continued to act into her late eighties, and her famous voice got increasingly smoky and gravelly due to a smoking-related chronic laryngitis. She passed away on July 31, 2017 at age 89.