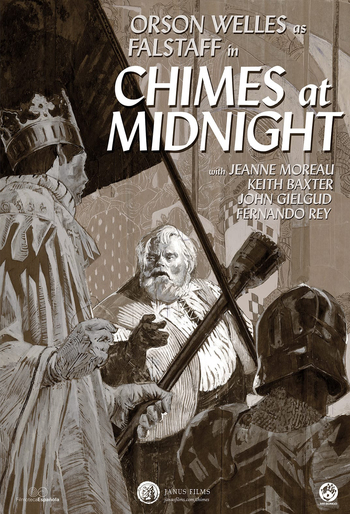 "Banish plump Jack, and banish all the world."
Shallow: Gesu, the days that we have seen.
Sir John Falstaff: We have heard the chimes at midnight, Master Shallow.
Advertisement:

Chimes at Midnight (also known as Falstaff) is a 1966 international co-production directed by and starring Orson Welles.

It is an adaptation of William Shakespeare's Henriad — Richard II, Henry IV (Parts I and II) and Henry V with some scenes borrowed from The Merry Wives of Windsor and an opening narration (by Sir Ralph Richardson) that features excerpts from Raphael Holinshed's chronicles. The film manages to blend this stew by centering the action not on the Kings and their Enemies but instead, around Sir John Falstaff, who as Orson Welles noted had more lines of dialogue than any Shakespeare character apart from Hamlet.

The film was made on a piecemeal budget, shot on location in Spain using left-over sets from earlier productions (mainly El Cidnote Spain at that time became a favorite location for producer Samuel Bronston, who made a number of films there including King of Kings, for which Welles contributed a narration) and was made as and when money came. Despite these conditions, however the film became celebrated in its day and afterwards for being the most cinematic Shakespeare attempted at the time, with its broad compositions, use of natural surroundings and most famously for its enactment of the Battle of Shrewsbury, which went on to inspire Kenneth Branagh's similarly revisionist Henry V adaptation, as well as Braveheart and Saving Private Ryan.

Orson Welles described Falstaff as "the only good man in all of Shakespeare" and regarded this film along with The Trial as his personal favorites among his own work.