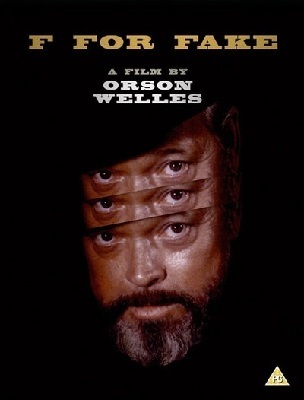 "Ladies and gentlemen, by way of introduction, this is a film about trickery, fraud, about lies. Tell it by the fireside or in a marketplace or in a movie, almost any story is almost certainly some kind of lie. But not this time. This is a promise. For the next hour, everything you hear from us is really true and based on solid fact."
— Orson Welles note  By the way, you may want to take note of how long the film is...
Advertisement:

The last major film written, directed and featuring legendary director Orson Welles during his lifetime. Made in 1974, it is essentially a fast-paced rumination on truth, fakery and expertise, particularly with regards to authorship and authenticity within art.

Originally, Welles was hired merely to narrate the film, to be directed by Francois Reichenbach (who appears in the film). The subject was Elmyr de Hory, a professional art forger who proudly boasted that he had sold thousands of paintings to galleries all around the world, with every expert who had examined them convinced they were the genuine article. He was the subject of a biography by Clifford Irving ... who, during filming, was discovered to himself be a fraud, having published a biography of notoriously reclusive billionaire Howard Hughes that was based entirely on forgeries and faked evidence. Reichenbach and his staff were horrified by this revelation since they had used Irving as a trusted source for a straight documentary about Hory, Welles however enjoyed this turn of events. He convinced the crew to give him the footage, where he made the entire film an exploration of fakery, that of Elmyr de Hory, Clifford Irving, the art galleries, Howard Hughes, Hollywood, mass media, Pablo Picasso's and of course his own tendency towards being a faker over his career. This leads to a Mind Screw that finally bleeds into the movie itself, until it's not sure what's real and what's not... and whether, ultimately, that even matters.

The fast-paced editing techniques used by Welles in the film have been credited with influencing, among other things, the "MTV" style that premiered in the 1980s. The format and style has been adopted by most YouTube video essays: combining documentary and satire, with the occasional skit thrown in. In fact, retrospective analysts have dubbed F for Fake a rare example of a "film essay" as a result of its unusual and influential presentation style. This was Welles' final completed film until The Other Side of the Wind was released on November 2, 2018, after 42 years in the vaults.

Real Life had a Downer Ending, by the way: de Hory killed himself in 1976 when told that he'd soon be extradited to France to face trial for forgery. And, as noted above, Welles was never able to complete another movie, despite continuing to work on various projects right up until his death in 1985.

F for Fake provides examples of: