Film / A Face in the Crowd 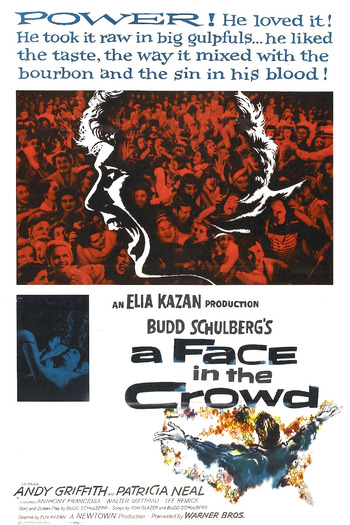 "Marshy, lookit all them TV aerials, stickin' up like branches—a whole forest of 'em. From here to San Diego. And all of 'em waitin' t' hear what I got to say."
— Lonesome Rhodes
Advertisement:

Roving young reporter Marcia Jeffries (Patricia Neal) brings her radio equipment into a podunk Arkansas jail and falls into an interview with one of the inmates, Larry Rhodes (Andy Griffith, in his screen debut), who proves — probably to his own surprise — to be a naturally charming and charismatic man. Christened "Lonesome" Rhodes, he soon begins a rocket-fueled ascent from drunken drifter to national media and political powerhouse, changing both of them forever. Among the people joining them for the ride are cynical radio/TV writer and Vanderbilt graduate Mel Miller (Walter Matthau), ambitious office boy Joey de Palma (Anthony Franciosa), and teen baton twirler Betty Lou Fleckum (Lee Remick, in her film debut).

Written by Budd Schulberg (based on his short story "Your Arkansas Traveler") and directed by Elia Kazan, this 1957 film's message about the power and danger of media demagoguery is still frighteningly relevant, while Griffith's vivid portrayal of Lonesome Rhodes helped him get his start in Hollywood, and is usually considered the finest performance of his career.

In 2008 the film was added to the National Film Registry.

Compare Network, another satire on mainstream media and media demagoguery from nearly 20 years later with a much more cynical edge.