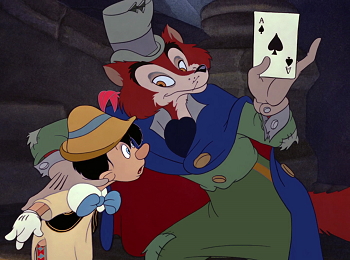 Allow me to use my whimsical nature to dupe you into almost getting turned into firewood and/or a donkey!
"There's a sucker born every minute."
— Erroneously attributed to P.T. Barnum

A trickster-philosopher who lives by pandering to people's greed and/or gullibility. Not only does he never feel guilty about it, but he will be offended by suggestions that he stop. If people want to be tricked, who is he to say no? Furthermore, if he's exposed, he'll shrug while admitting it and use his backup pitch about the con with equal fervor.

The true mark of the Barnum is how serene and happy he usually is, despite what he does every day. He's reached a cynic's nirvana. He may be a Slimeball, but at least he admits it.

Sub-Trope of Con Man and The Trickster. Compare the (usually adolescent) High-School Hustler. Closely related to the Snake Oil Salesman and Honest John's Dealership. May have contributed to the emergence of Repulsive Ringmaster. In a musical, you can expect this character to get a particularly fun Villain Song.