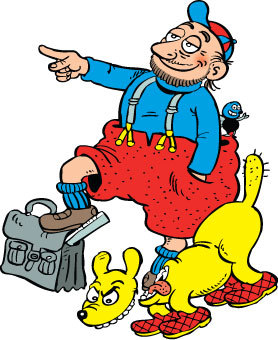 Believe it or not: based on a Real Life person.
Advertisement:

Urbanus is a long-running (1982) Flemish comic book series, based on the popular Flemish comedian and singer Urbanus, who also writes the stories. The strip itself is drawn by Willy Linthout. It's by far one of the most popular comic strips based on a celebrity, and thanks to the popularity of the comedian in the Netherlands also a success there.

The stories revolve around Urbanus, a ten year old boy with a full beard, who is basically a bad boy. His father, César, is a drunk, pipe smoking fool who constantly cheats on his very pious wife Eufrazie (Usually Played for Laughs). Urbanus has two pets: a yellow dog with a floating head just above the lower jaw called Nabuko Donosor and Amedee the intelligent fly. Just like the real Urbanus the characters all live in the village Tollembeek. The strip has many secondary characters who are all either stupid or corrupt, or both. Urbanus is a children's comic strip, but has a lot of bawdy, blasphemous and violent jokes.