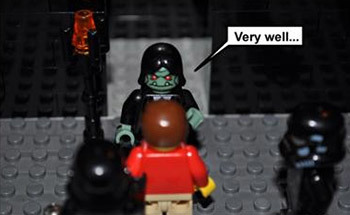 A creative option for people who can't draw (or who just want to 'draw' with a camera?) the Photo Comic involves taking pictures of things — either posed inanimate objects, or actual people — and making a comic out of them. In the Webcomics world, toys are popular for this. Also became popular in British comics (particularly girls' comics) in the late 1970s and early 1980s; however, it proved unpopular and the ones that didn't shut down (as many were at the time) reverted to drawn strips. Nowadays the best-remembered photo strips seem to be the parodies of photo strips from Viz. Arguably, Photocomics can be done cheaper and with less time consumption than the other popular choice: Machinomics. This is because photos lend themselves well to settings where realistic lighting is in high demand, requiring a lot fewer tweaks than would screenshots from a video game.

A variation is the fumetti, which takes the frames of a film or TV show and puts them into comic-book form: See Film Comic. Another variant involves creating scenes in Poser or DAZ Studio and importing them into Comic Life

. Not to be confused with GIS Syndrome, where photographs are incorporated into the background.