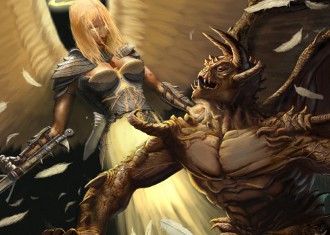 "Demon VS Angel" by JoeSlucher

Often, even when an angel is portrayed as being male, he will still be played by a woman. Aversions generally seem to occur when heaven is represented as some kind of bureaucracy. When Played for Laughs, the relationship between the angels and demons will be portrayed as a friendly rivalry that inevitably leads to se...um...romance.

In the rare cases where the genders are inverted, the angel will be indeed more masculine than the usual standard, but he will mostly be here to highlight that Good Is Not Nice and will often be cold and unemotional. The demoness, on the other hand, will mostly be The Vamp, at best a Manipulative Bitch if non-sexualized, but she will seldom be portrayed as physically intimidating as her male counterpart. And don't expect any romance between them if they ever happen to be on "friendly" terms because My Girl Is Not a Slut.

Inversions also often occur with occult motifs, as light is traditionally masculine and darkness traditionally femininenote More often than not, though, historical depictions tended to just make both sides male.

Oddly enough, most classical visually artistic depictions of Abrahamic angels such as Michael or Gabriel are those of men. Youthful, powerful, admirable, virile men. This is in spite of the fact that there's supposedly no description of their gender in scriptures. Moreover, those angels' names have always been used to name boys.

Naturally, this trope often carries the Unfortunate Implications that women are good and men are evil. Additionally, it could be said that Wish-Fulfillment may come into play as well when there's romance involved, i.e., the classical plot of a caring and merciful woman who redeems an evil man with love. Gender reversals are increasingly common, but still rare- your guess is as good as ours as to why.