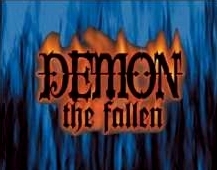 The final game in White Wolf's Old World of Darkness.

The pinnacle of the Houses' collective act of creation was mankind, destined to be a reflection of all the greatest traits of God and Angels and beyond. Except it didn't happen. Everyone waited and humans were still focused entirely on humping and eating anything they saw. The angels tried to ask God what was wrong with them, but anybody who went to see Him didn't come back, with the best case scenario being that God assimilated them and worst case unmade them.

There was war then, between the loyalists and the rebels, war for countless mortal generations, the rebels steadily making themselves into true monsters as it progressed. In the end, the loyalists triumphed, and the vanquished rebels were sealed in a featureless abyss.

Millennia later, the Abyss cracked open as a great storm raged across the realms of the dead, and the fallen angels began escaping, with the weakest demons slipping through the cracks first. Weakened, they had to possess the bodies of dying or comatose humans to survive. There was no sign of any angels or God's influence left in the world, which was now filled instead with jaded humans and unfamiliar supernatural creatures. During their time in the Pit, the demons had fractured into five factions, which came to color their philosophies now that they were free: those who wish to destroy all of creation to spite an absent God (Raveners), those who see Lucifer as the Messiah of both mankind and angels (Luciferians), those who want to fashion mankind into a weapon to destroy God (Faustians), those who seek redemption and repentance (Reconcilers), and those who have come to the sinking realization that all of this was probably what God wanted to happen (Cryptics), and want to figure out why God would want this, of all things?