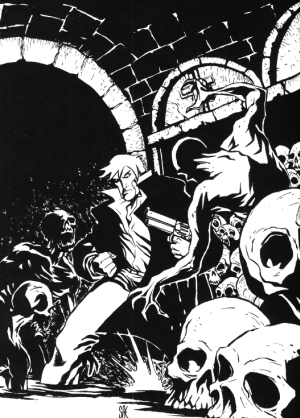 Defeat the other game lines and die trying.
Advertisement:

THERE WILL COME A RECKONING.

A tabletop game in White Wolf's Old World of Darkness.

Shortly before the turn of the millennium, people across the world start to receive strange messages — voices in their heads, words on pages rewriting themselves, graffiti that wasn't there a moment ago.

IT DOES NOT LIVE.

TAKE BACK THE NIGHT.

Moments later, they find themselves looking at an actual, inhuman monster, the Masquerade abruptly ripped away, the illusion of humanity suddenly dispelled.

However they react — talking, shouting, attacking, defending - they find themselves gifted with supernatural abilities, just enough to extricate themselves from the situation.

But even once it's over, they still get the messages. Still see the monsters. They can't just stand by; they need to act.

Being relatively new to the shadows of the World of Darkness, these new 'hunters' don't have much of a shared community or vocabulary; the closest thing they have is Hunter-net, a website where they can get together and share what they know. This being the Internet, it can often be more trouble than it's worth.

Unusually for a White Wolf product, the terminology is rarely used in-game; the imbued don't have a fixed shared vocabulary for their experiences, and come up with their own words for what's going on (though some become common parlance through Hunter-net). In other words, there's a lot less Grouped for Your Convenience going on than usual in the OWoD.

Following the original game's cancellation, along with the rest of the Old World of Darkness, in 2004, it was announced in 2021 that a new edition of Reckoning was slated for release as part of the resurrected World of Darkness begun by Vampire: The Masquerade 5th Edition.