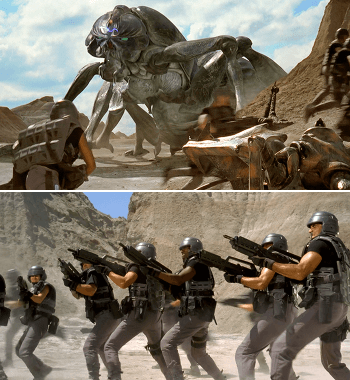 It appears most good guys are Genre Blind. When military personnel or the police encounter the Monster of the Week, they invariably attack it with small arms fire. Unfortunately, this never works. The monster is always Immune to Bullets. Thus, our heroes get an opportunity to save the day with some Applied Phlebotinum or Stock Superpowers.

An important part of this trope is that, in almost all cases, the good guys will only ever use small arms fire instead of escalating. Rockets, tanks, air support, artillery — all the things the military is known for — are rarely involved, even if the monster is gigantic. Not only are they more expensive for the producers to incorporate in to the film/show, in most cases, they might actually work, thereby stealing the thunder of the heroes of the story. Even if they do get used, they still probably won't work.

If the monster in question is absurdly slow moving, expect the soldiers to remember what their mommy told them about how you Do Not Run with a Gun. If, after they discover their guns are useless, the good guys still won't stop wasting ammo shooting the baddie, it's I Will Fight Some More Forever.

Very often in instances of this trope, a Technical Pacifist will urge the army/police/whomever to try and understand the monster before trying to kill it. Depending on the attitude of the series, they may either be considered a naive idiot or a paragon of virtue.

If the army just wants to Nuke 'em, the heroes' job will be to find a solution with less collateral damage before it's too late.

Named for a line in the Doctor Who episode "The Dæmons", where Brigadier Alistair Gordon Lethbridge-Stewart orders a UNIT soldier to shoot the Monster of the Week five times, quickly.

Compare with Shooting Superman and Giant Equals Invincible. Contrast with Death of a Thousand Cuts, which is when a relatively small weapon is used exclusively (and extensively) against a large target and succeeds. See also Underequipped Charge, and More Dakka, which is often more than just five rounds, and may or may not produce better results.