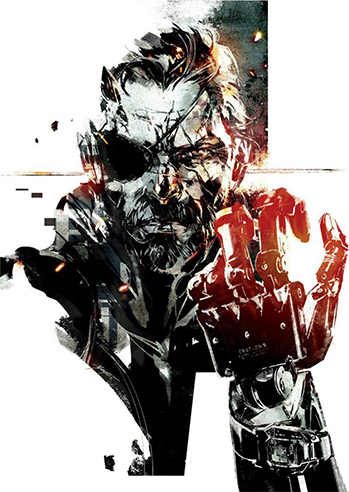 In Outer Heaven... Men Become Demons.
"It is no nation we inhabit, but a language. Make no mistake; our native language is our true fatherland."
— Emil Cioran, Romanian philosopher
Advertisement:

The year is 1984. It's been nine years since Big Boss's legendary mercenary outfit, Militaires Sans Frontières, was laid to waste by the American black-ops group Cipher and their elite XOF Unit, with the man himself left comatose, brain-damaged, and horribly disfigured. Nonetheless, word has begun to spread that "V has come to."

After narrowly escaping an XOF attack on the hospital he is being held in, the newly christened "Venom Snake" takes command of a new mercenary unit, Diamond Dogs, founded by fellow MSF survivor Kazuhira Miller and GRU agent Revolver Ocelot. His mission? Take revenge on Cipher and XOF, no matter the cost. Standing in Snake's way are the Soviet army stationed in Afghanistan, various African PMCs in Cipher's employ, and XOF themselves, along with a mysterious new weapon that may surpass even Metal Gear...

The Phantom Pain also ties several multiplayer functions into the single-player. Players can invade the Mother Base of others and steal supplies, while the invaded players can defend themselves and their base from their foes. The Metal Gear Online competitive multiplayer mode returns as well, developed by Konami Los Angeles.

Unmarked spoilers for previous games in the series ahead. Avoid or read at your own risk.