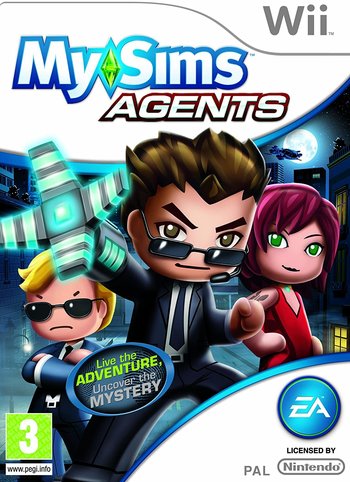 MySims Agents is a fifth instalment of The Sims spin-off game called MySims series. It was released in 2009 for Wii and DS.

The game story tells about how an agent successfully save the world from an evil corporation that the adventure is very famous to the point the story got adapted as a best selling comic written by Buddy, who’s said agent's partner during their time as agents.

Unlike the previous instalment, the gameplay focused on solving cases by investigating and find any clues that lead to real suspect and platformer. The game also introduces puzzle mechanic that needs to solve with special gadgets in order to solve a case and dispatch mission which the player can send the recruited agents to solve other smaller cases to earn rewards.

This spinoff includes examples of: