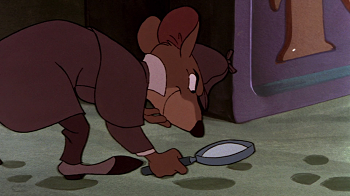 Ace Dick is a very good detective. How do we know this? He can follow the obvious trail of footprints directly to the culprit!

Much like Thief Bag is about an image summarizing a profession, someone following footprints (preferably with a magnifying glass) is a detective or investigative sort. Common gags in cartoons include the character picking up one of the footprints for a better look, to end up following their own footprints around or to follow the footprints to their owner and only noticing they're standing there when examining their foot with the magnifying glass.

This trope is pretty common in children's media. In more realistic works, detectives are often shown examining footprints carefully, but generally, rather than following a convenient trail of them, they're measuring them, thereby learning at least the criminal's shoe size, possibly his height (based on his stride length) and if they're very lucky, that he has a noticeable limp and shoes with one heel worn down further than the other. If the work is set before fingerprinting (or the criminal wore gloves) this may be the best identifying mark available.