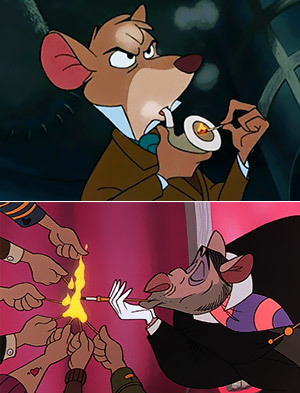 Smoking might be the only interest they both share.
"These days, when someone smokes in the movies, it's either a psychopath... or a European."
— Nick Naylor, Thank You for Smoking
Advertisement:

Smoking is generally considered bad for you. Thus, smoking is portrayed by the villain, so as to drive home the Aesop that Drugs Are Bad.

It is almost never portrayed as "cool" in 21st century media, and even the badass seems to be quitting the habit. In children's cartoons, it's perfectly acceptable for a villain to smoke, especially if they blow it in somebody's face, but the hero thinks it's a disgusting habit, or they may be trying to quit. Alternatively, a heavy smoker may be shown as extremely affected by the smoke to show how bad it is.

The rule is suspended under very specific conditions:

Also, what and how one smokes determines Good Smoking from Evil Smoking.

Not surprisingly, before the Surgeon General's report on tobacco use this trope was almost completely reversed. Non-Smokers were uptight and uncool, Smokers were just doing what everybody else did, and were perfectly normal, and made smoking look cool and perfectly healthy. It was more common for heroes to smoke than villains.

The critical change was in 1964 when the US Surgeon General released a damning report of the incontrovertible link between smoking and lung cancer, which convinced the public to gradually turn against tobacco. By The '70s, the No Smoking trope had gotten sufficient strength that tobacco advertising on American TV was banned and artists were encouraged to downplay tobacco such as in the TV series, Kojak, when the detective switched to lollipops and made them his trademark.

See Also: Red Right Hand, Uncleanliness Is Next to Ungodliness, Fur and Loathing.

Contrast Smoking Is Cool, Everybody Smokes, and No Smoking.

He chomps a Cuban cigar in his cutscenes...and grinds it out on his paw pad.

He chomps a Cuban cigar in his cutscenes...and grinds it out on his paw pad.