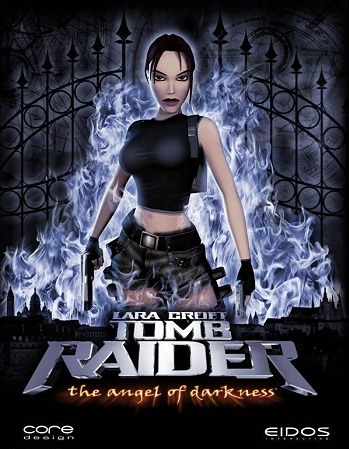 "D'you know it's going to be a real pleasure to shut you up."
Narrator: There have been seventeen reported murders so far in this latest outbreak of Monstrum killings. It would appear to be the work of a single highly psychotic perpetrator. The name of the latest victim was just released: professor Werner Von Croy. A female, described as Caucasian, brunette, and wearing a ponytail was seen leaving the most recent crime scene...
Advertisement:

Lara Croft Tomb Raider: The Angel of Darkness was released in 2003 and is the sixth installment of the Tomb Raider video game series. It continues on from the events of The Last Revelation and Chronicles.

It was the first Tomb Raider created for 6th-generation hardware, but also the last game in the series to be developed by Core Design, the game's commercial failure and negative reception spurring Eidos Interactive into taking away production of the Tomb Raider games from Core Design. Subsequent entries were produced by Crystal Dynamics, an American developing studio.

The game sees the return of Lara Croft, but this time, as a wanted fugitive. The police consider her the prime suspect for the murder of Werner Von Croy, her mentor, the latest in a string of killings committed by a notorious serial killer only known as 'The Monstrum'. With her own recollection of the events surrounding Von Croy's death blurry at best, Lara sets out to clear up what happened, but unexpectedly ends up caught in a ancient conflict centering around 5 crucial Obscura Paintings, which, if they are all collected, can place the world in great danger. Joined by a mysterious stranger, she dives into the underworlds of both Paris and Prague, determined to clear her name.

The game is notorious for the mixed reception it has garnered; while it featured a gripping, dramatic storyline, pretty visuals, exploration and, as always, an amazing score, it was simply unfinished. A large amount of features were left in an obviously unfinished state, further marring the game experience, despite the fact that the game was delayed numerous times (it had orginally been slated for a late 2002 release). The blame is most often pointed at Eidos Interactive, for pushing Core to release the game, despite its unfinished state. However, Core is not entirely blameless, having missed numerous deadlines, and being too ambitious in certain areas. Predictably, the game got bad reviews and had one of the highest return rates for a game ever. Despite all this, the game does have its fans, mainly due to its well-executed storyline and fitting atmosphere, however purists tend to cite it as an example of Lara Croft being moved away from her origins as an archeologist and more towards being a deadly action character.

Released for the PC, PlayStation 2 and the Mac.