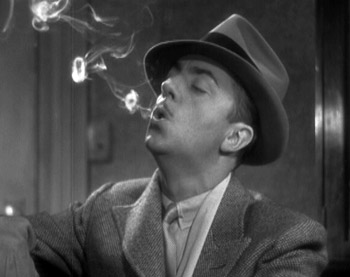 Nick Charles, cool customer.
"Brad Pitt. Catherine Zeta-Jones. They've just finished ravishing each other's bodies for the first time. They lie naked, suspended in air underneath the heavens. Pitt lights up. He starts blowing smoke rings all around Catherine’s naked, flawless body as the galaxies go whizzing by over the glass dome ceiling. Now tell me that doesn’t work for you!"
— Jeff Megall, Thank You for Smoking
Advertisement:

When it's time to relax, a smoker will take out their cigarette, pipe or cigar and enjoy some quiet contemplation. And one fun thing to do when you're puffing away is to blow smoke rings, i.e. visible vortex rings of smoke.

When this is done in the company of friends, it can often become a contest. If a Magical Being is involved, or it takes place in a world governed by Cartoon Physics, expect the smoke rings to take on more unusual and elaborate shapes than mere rings.* Squares, hearts and other shapes can actually be produced in real life by experienced blowers, but since they look impossible they are often seen blown by "magical" smokers. An obvious subtrope of Smoking Is Cool. Occasionally can result in Second-Face Smoke if the smoker wishes to be rude to someone. May take place in a Smoky Gentlemen's Club.