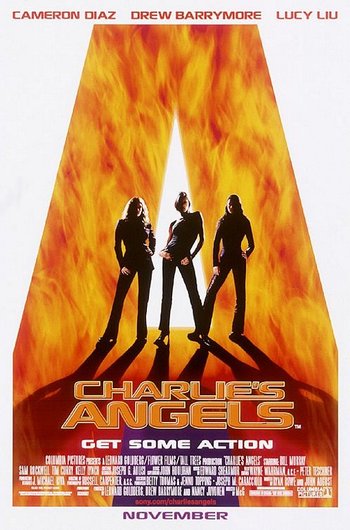 Once upon a time there was a very successful TV series about three female private detectives. They worked for a mysterious man called Charlie who was never seen, and who called them his "Angels". Almost 20 years after the last episode aired, the franchise was revived as a pair of theatrical films, set in the early 2000's, with a new set of Angels.

It is worth noting that the movie series is not a Continuity Reboot of the series, but a continuation. These movies star Cameron Diaz (Natalie), Lucy Liu (Alex) and Drew Barrymore (Dylan) as the Angels, with John Forsythe returning as the voice of Charlie.

It received a sequel starring the same Angels in 2003, called Charlie's Angels: Full Throttle. Tropes for that film can go there.

A continuation of the story premiered on November 15, 2019, starring Naomi Scott, Kristen Stewart, and Ella Balinska as the titular trio, with Elizabeth Banks directing, producing and playing Bosley. Tropes for that film can go there.