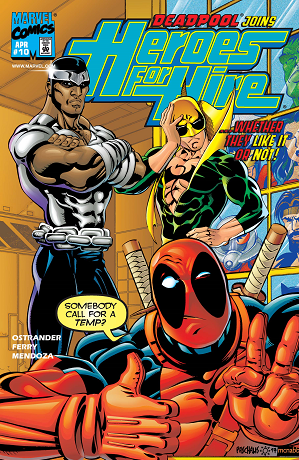 "I didn't kill that Yoma to save you; I killed it because it's my job."
— Teresa, Claymore
Advertisement:

The Punch-Clock Hero isn't fighting for peace, revenge, or because it's the right thing to do. He's only going against the Big Bad because he has to. In some cases, he is destined to do so but refused the call, only to find out that You Can't Fight Fate. In other cases, he gets involved only because he has bills to pay.

This is usually what happens when a hero is True Neutral. Compare Heroic Neutral, where the heroic character wants to be left alone and only allies with a group (usually the heroes) when their isolation is threatened by an outside source. If the culture becomes toxic, the heroic character can become a Punch-Clock Villain. See also Byronic Hero.

This can be seen as a Sub-Trope of the Nominal Hero which doesn't do good out of heroic intentions with this case being for profit. When things really come to a head and profit goes against morality, a hero of this sort will likely either show their better nature and find something greater and worth fighting for, or prove how circumstantial their heroism was and how easily fate can turn them to evil.

Only in It for the Money is a Sub-Trope, as is Not in This for Your Revolution. Should not be confused with a hero smashing his alarm clock.

May overlap with I Was Just Passing Through. When the heroes take it a step further and actually cause the danger they're paid to neutralize, it becomes a Monster Protection Racket. Contrast Part-Time Hero, who is ready and willing to do heroic actions without payment - though they might not say no to money if offered - so long as they're allowed a break here and there to live a civilian life.