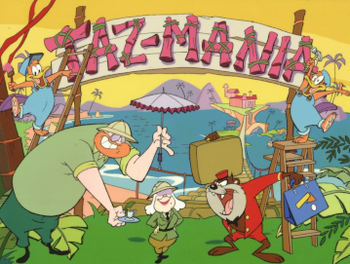 Welcome to a land that's way under down under, the sky is always yellow come rain or shine!

This 65-Episode Cartoon series focuses on the vicious, carnivorous Looney Tunes Anti-Villain, the Tasmanian Devil aka "Taz". Only now he's not any of the three (unless he's trying to eat the Keewee, but we'll get back to that); instead it just shows Taz in his native Tasmania. Taz spends time with his family, hangs with his pals, collects bottle caps, works at his job as a bellhop and tries to eat the kiwi. Sure, it may sound boring, but no matter what Taz does, Hilarity Ensues.

Have we left anyone out? Oh yeah. Don't forget Taz.

So as not to create an entire family of Tazes, despite being the eldest child of three, Taz himself is portrayed as being somewhat backwards, with his family being (relatively) civilised and fully capable of speaking English. However, they too are also fully capable of causing carnage, though they have more self-control. His parents are especially patient and understanding with him... like they would be if he was... you know... special.

As with many 90's cartoons, it got a few Video Games. The Sega Genesis game was a fairly standard side-scrolling platformer while the game for the SNES was an obstacle/racing game where Taz ran down the street tying to catch and eat Kiwis and other birds.