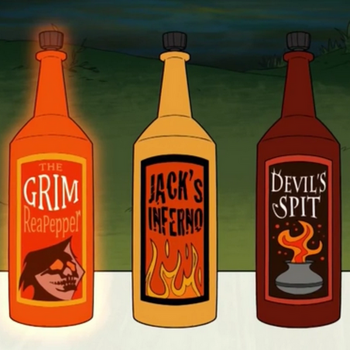 "These labels can't stop me because I can't read!"
"By the powers of naughtiness, I command this particular drop of hot sauce to be really, REALLY hot!"
— Drop of Hot Sauce, SpongeBob SquarePants
Advertisement:

One of the most common ways to induce fiery breath, Blazing Inferno Hellfire Sauce is one of the most dangerous substances known to man. This stuff is so ferocious it gives off heat, and may even set inflammable materials alight when applied directly to them. In extreme cases, such materials might go up just by being next to this stuff.

As a rule, it's usually made from a special pepper that only grows in one obscure (and probably nonexistent) location in the jungles of wherever.note Which is odd considering that the hottest peppers in the world can't be found in the wild—they're bred by farmers. It can only be safely harvested wearing full hazmat gear and a tank of compressed oxygen connected to a breathing mask. Often, other ingredients used in the making of the sauce include lava, uranium, and pure unadulterated anger. The sauce will typically either be specially requested, since no restaurant is just going to leave something like that out in the open, or used as part of a challenge to customers by the restaurant. It may actually be illegal in some countries.

Naturally, the Big Eater can't get enough of the stuff. He puts it on everything he eats, and probably carries a bottle (or bottles) with him in case there's no other source. Any other character who dares taste a drop of the stuff will soon be making a beeline for the nearest large body of water (or outhouse) to dunk their head into, but there's always one character Unaffected by Spice, who considers it a necessary condiment for every meal, and may even occasionally drink it straight.

The spiciness of food, especially of chili peppers and Scotch bonnets, is measured on the Scoville scale. The number of Scoville Heat Units a food has is equal to as many grams of sugar syrup one gram of that food needs to be mixed with, evenly, before its "hotness" is undetectable by a taster. Basically, the more capsaicin a food item has, the hotter it tastes. Extracted pure capsaicin sits near the top of the scale (behind two chemicals, resiniferatoxin and tinyatoxin) with a Scoville rating of up to 16,000,000. While the scale is generally considered scientifically inaccurate, it still remains a pretty good (if imprecise) way to comparatively judge just how hot a certain pepper actually is.

Compare Gargle Blaster and Klatchian Coffee for alcoholic and caffeinated drinks respectively. Woe betide us if they are ever combined, though this is often an essential ingredient in a Hideous Hangover Cure (or it might simply be used as one by itself).note However, in real life a glass of beer can help take the edge off a dose of Blazing Inferno Hellfire Sauce because capsaicin is soluble in alcohol. But not water. Stronger alcohols therefore provide more relief, though one may wish to spit or use something like Listerine mouthwash, which also contains alcohol, to remove the stuff. As capsaicin is also fat-soluble, an alternative is fatty dairy products like whole milk and cheese (But avoid swallowing for the really hot stuff or it will just move the problem downstream.) Sometimes shares the corrosive effects of Hollywood Acid, generally indicated by its dissolving a teaspoon or similar. A very common form of Masochist's Meal. Will likely result in a Fire-Breathing Diner. As you may have guessed by now, in both real life and in fiction peppers and sauces of this class tend to have Names to Run Away from Really Fast.

LaBarbara's curried goat is so spicy that a spilled drop eats its way through the floor of Judge Whitey's apartment, Sal the Surly Delivery Man's stomach, and to Robot Hell, scalding the Robot Devil. Hermes, however, thought it needed more hot sauce after a taste.

LaBarbara's curried goat is so spicy that a spilled drop eats its way through the floor of Judge Whitey's apartment, Sal the Surly Delivery Man's stomach, and to Robot Hell, scalding the Robot Devil. Hermes, however, thought it needed more hot sauce after a taste.